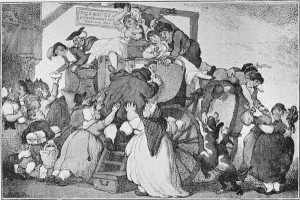 The history of travelling to Bath can be divided into four periods – no coaches, slow coaches, fast coaches and railways. No coach travelling in the Middle Ages was an uncertain affair, picking your way along the remains of the roman roads. From 1555 the responsibility for road maintenance was given to local parishes and the local population could be forced by law into working for free. This made for variable road quality from passable to very bad indeed! The first slow coaches from London to Bath started in 1667 and were called, ironically, “flying machines”. It was announced..

“FLYING MACHINE.
“All those desirous to pass from London to Bath, or any other Place on their Road, let them repair to the ‘Bell Savage’ on Ludgate Hill in London, and the ‘White Lion’ at Bath, at both which places they may be received in a Stage Coach every Monday, Wednesday, and Friday, which performs the Whole Journey in Three Days (if God permit), and sets forth at five o’clock in the morning.
“Passengers to pay One Pound five Shillings each, who are allowed to carry fourteen Pounds Weight—for all above to pay three-halfpence per Pound.”

It was not until 1688 that the English Queen Anne, suffering from gout, travelled to Bath to take the waters. Had she not, it is likely that Bath would have remained a quiet backwater in the West – however, she started the fashion of coming to Bath and soon competition and demand drove rivals to in 1711 lay on a coach service. An enterprising cooper called Thomas Baldwin started the first daily services to Bath around 1716. Soon there were coaching companies setting up all over London to bring the fashionable to Bath. Londoners saw the adverts daily:

“Daily Advertiser. April 9, 1737.
“For Bath.
“A good Coach and able Horses will set out from the ‘Black Swan’ Inn, in Holborn, on Wednesday or Thursday.
“Enquire of William Maud.”

The first mail-coach in England ran between London and Bristol, stopping at Bath, and set out on Monday, August 2, 1784. It was expensive to send post by this methods, 2s (shillings) versus the 4d (pence) mounted post boy. It was worth paying six times as much if you wanted your mail to arrive given all the risks of being robbed by highway men (and women!)

Travelling was still treacherous though. At Christmas, 1836 three passengers on the mail-coach died of frostbite!

What was needed was better roads and faster coaches…