The route into Bath from the west descends Beechen Cliff and the old route is still visible on the maps as Holloway. It was originally built by the Romans (although probably on older tracks) and was a part of the Fosse Way, that ran diagonally across England from the Roman cities of Lincoln (Lindum Colonia) to Exeter (Isca Dumnoniorum) in the South West after passing through Bath (Aqua Sulis).

After the Romans had left England around 410 AD, the road continued to be used, but not maintained. The constant traffic into Bath, plus the rain water may have “hollowed” out a deeper and deeper track, giving rise to it’s name. The path of this section would have been very steep and todays traffic diverts down a much smoother route along the current A367 after the 19th century Turnpike company decided it was too dangerous for traffic. You can get a good sense of this last descent into Bath from this passage of 1801, by the Rev’d Richard Warner in his “Excursions from Bath”:

“The approach to Bath, on the west side, had for ages been down a steep rugged concavity… called Holloway…” he goes on to describe the seasonal beggars and the coal mining animals who reside in this district.

You can see the Holloway in the photograph below: 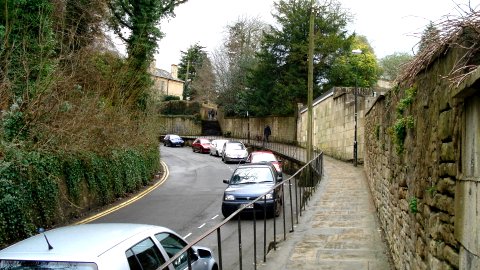 Also in his book, the rev’d Walker describes how horses and asses are make to carry coal down into Bath. A 19th century poem laments the death of a horse and a copy has been mounted at one of the old water troughs.

An alternative name origin for Holloway may be “Holy Way”. In Mediaeval times, Pilgrims would visit Bath to honour St Dunstan, who was a reformer of English monastic life. It was St Dunstan who crowned the first “King of England”, Edgar at Bath Abbey in 973. It may have been these pilgrims who named it the Holy Way.