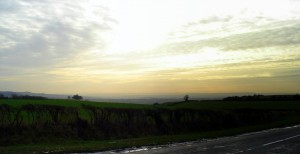 The Kingdom of the Hwicce - the view from Hinton near Bath

Following the Battle of Deorham (Dyrham, Bath) in 577 AD, the Saxon’s (who we can now think of as Anglo-Saxons, having control over large parts of Southern England) established the Kingdom of Hwicce. The Kingdom of Hwicce would have included parts of Worcestershire, Gloucestershire, Warwickshire and extended down to Bath (north of the Avon) and part of Wiltshire. We do not know the origin of the name Hwicce, however, it is similar to Gewisse, the orginal West Saxon invaders, lead by Cerdic in 495 who landed on the south coast of england. The Gewisse are also possibly ones defeated at The Battle of Mount Badon (a battle thought to be fought in Bath). The name could be linked to ‘ge-wit’, Saxon for “those who know” (and forms the basis for “Witch” and “Wit” in English). Alternatively Hwicce may originate from “sacred vessel”. The Celtic predecessors to the Hwicce were the Dobunni who worshiped a goddess with a cauldron (as in Bath, water was sacred). It has always been part of the tradition in the West Country, especially around Glastonbury, some 30 miles west of Bath, that England was the resting place for the Holy Grail, the “sacred vessel” from the Christian story of The Last Supper and part of the tradition of King Arthur. In displacing the Dobunni, the Hwicce may have been taking on some of the ancient Roman culture and knowledge – “those who know” or adopting some of the Celtic/Christian culture – “sacred vessel”. By the seventh century, the Hwicce were Christians themselves and they remained an independant culture, even when overun by Penda of Mercia in 628. The first Christian King of the Hwicce was Eanfrith (c.650s – c.674) and it was his son, Osric (c.675 – 679) that granted the Abbess Berta 100 hides (a hide was originally a unit of land capable of supporting a household) near Bath for the establishment of a convent, so starting the Christian building tradition in Bath.

Eventually the lands of the Hwicce were absorbed into the Anglo-Saxon House of Wessex in the 870’s, which spawned Alfred the Great, a major builder developer of Bath.