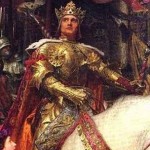 This is another story where the History of Bath blends with Myth. The Battle of Mons Badonicus (Badon Hill) is the legendary “last battle” of King Arthur. Sometime around 500 BC, the Britons seem to have countered the advance of the Anglo Saxons and this has become mixed with legend and the stories of King Arthur. In the History of Bath there must have been many such battles over such an important river crossing and religious site. But who was Arthur and where exactly was this battle? Some sources place the battle on the hill at Bathampton, where remains of an Iron Age fort survive. Others place this historical battle just north of Bath on Solsbury Hill (Hill of the Sun), site of another Iron age fort. Badon was the post Roman name for Bath. As to the identity of Arthur, it seems that the best contender is Ambrosius Aurelianus who British historian Geoffrey of Monmouth (12th Century AD) says is brother of Uther Pendragon (not son). He is reputed to be the descendant of an important Roman family, who galvanised the Britons against the Saxon invasion.

This map shows the location of Bathampton Hill.

This map shows the location of Solsbury Hill.