From 750 BC onwards, the Celts (Britons) knew the place as Sulis, named after the Goddess Sulis, who appears to be a local water deity. The name Sulis may have come from the Old Irish, Suil for “eye” or “gap” or the from Old Welsh “haul” meaning “Sun”.

After the Emperor Claudius’ Roman’s invaded Britain in 43 AD, they arrived in Sulis around 60 AD – cries of “What have the Roman’s ever done for us”. They built the Bath’s and a Temple as well as upgrading the roads. The Roman’s did not throw out the old name of Sulis, they simply “upgraded” that as well! They called the new town Aqua Sulis meaning “the waters of Sulis”. Similarly, the  Romans “improved” the Goddess Sulis by adding Minerva to the name. So the temple in Aqua Sulis was dedicated to Sulis Minerva. 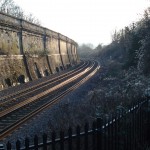 Bath Spa, one of the many names for Bath, arrived with the railways

Christianity arrived in Wessex after 200 AD but probably closer to 635 AD. The name of the town was probably a bit too pagan for the Christians. For the next few hundred years the name of Bath seems to have evolved into a number of variations, starting with the Anglo Saxon Hat Bathu (hot baths) then Achamanni, Aquamania, Akimannis castrum or Aquamann. These all mean something like “the place of the waters”.

After the Saxon gained control of Bath at the Battle of Dyrham the towns name became Baðum, Baðan or Baðon – “at the baths” – the “ð” sounding like a “th”.

Queen Elizabeth granted Bath a royal charter in 1590, so it became the City of Bath.

Finally, the railways arrived in Bath and two stations were built. One was called “Bath Green Park” so the other was renamed “Bath Spa” in 1949 to avoid confusion and so the city is sometime referred to as Bath Spa.